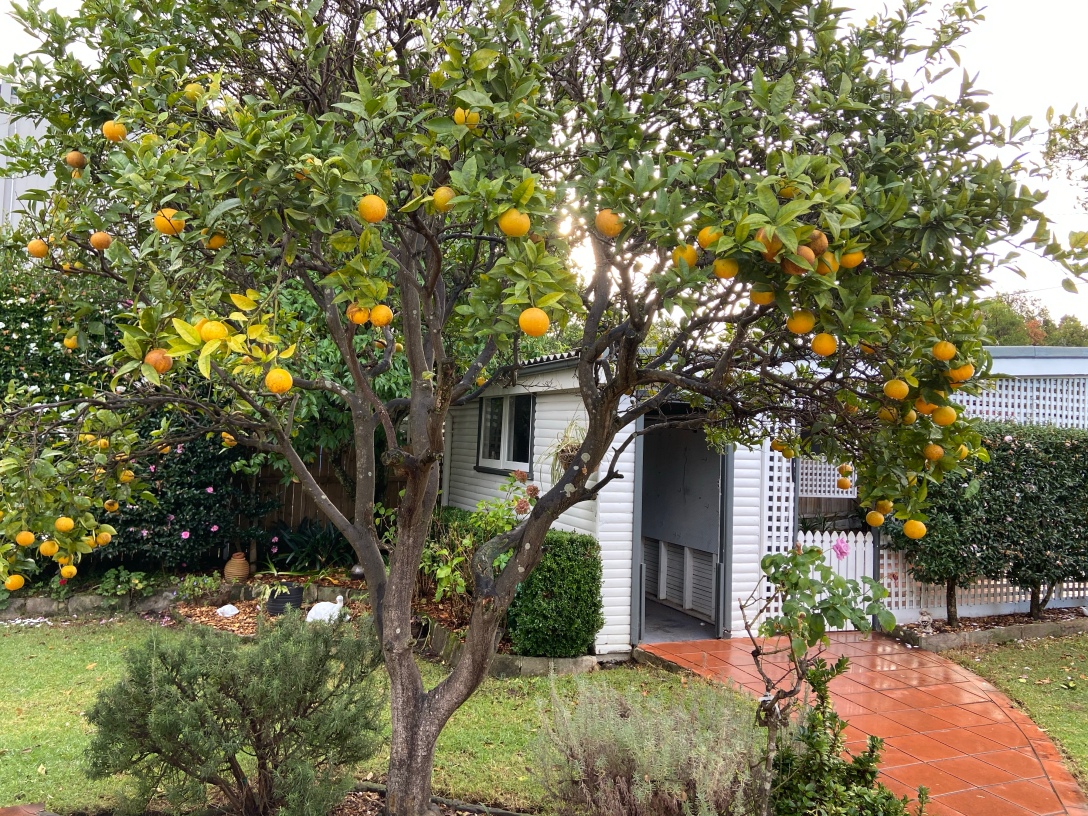 We nearly didn’t go to the inspection of the house. I was pregnant with twins and nauseated by the drive; Riley wasn’t that interested in the places we looked at. And James was about ready to give up after both houses we had seen that day turned out to be not what we were looking for. We had some time before the third, the final inspection for the day and we sat on a bench gazing at the lake and considering just going home but then eventually James said, well, we might as well have a look since we are so close anyway.

The house was huge and it appeared even larger to us after our cramped two bed unit. There were a lot of people looking but what I remember the most is the garden: the lemon tree full of ripe lemons and a mandarin tree and flowers everywhere; and a tiny golf area behind the house. I remember white walls and white shutters and the fireplace which I knew would excite James (and – secretly – myself) but probably would be a hazard to the unborn babies in my belly. The back room would be good when my parents came to stay with us, the whole COVID business hopefully behind us soon enough. The huge amount of space and the lemon tree; relatively close to the beach and the lake but not so close that floods would be a threat. We started calling it a beach house before we even put in our application.

Only after we got approved we realised that the place didn’t have a dishwasher. “I’ll just do the washing up myself in the sink”, James said, ever an optimist, but I knew we’d struggle, especially once the twins were born. So we talked to the agent and then directly to the landlady who didn’t hesitate to just drop in at any point of the day; she sent a handyman in who cut a hole under the sink to put the dishwasher in. “I don’t mind,” – she said. “When I move in I can just slide my own dishwasher in there!”

That gave us pause. Our lease was for a year but we assumed we’d be staying far longer that that; I was slightly panicked at the thought that we’d have to move when the babies were so little. It was too late to cancel on the move. We paid for the installation and bought a slimline dishwasher as a bigger one wouldn’t fit in the provided hole; the plumber commented that the pipes were very old and would cause trouble eventually and I told him we were renting and wouldn’t be replacing the pipes.

The house was ancient, minimal repairs done for a quick sale. The gardens around it were majestic and covered in spider webs. The bathrooms smelled of mould and we immediately changed the old toilet seat which stank of urine no matter how much bleach I put into the toilet bowl. It was a stark contrast to our previous place with a fully renovated bathroom and the beautiful deep bath I spent hours in while pregnant with Riley. We told ourselves we could make the place our own though; I had a cleaning schedule going and got a cleaning appliance specifically for the ancient wooden floors. When I got too pregnant to move too much, James kept up with the cleaning as best he could. I put removable stickers in Riley’s room and got her a star projector; she finally started sleeping through in her own bed. It was getting cold and we had the fire going making the whole place cozy and welcoming and as much as I missed our old neighbourhood sometimes I also started to enjoy my daily walks to the waterfall and looking out in the garden and the clothesline outside that made laundry so much easier. We found a tiny playground just around the corner and Riley was always excited to go there on her bike as I tried to keep up, huffing and puffing and holding on to my giant pregnant belly.

James investigated and it turned out that the landlady’s other property was for sale. He called her and she said she was going to move in to the house once it sold. That made us anxious once again but our neighbours told us not to worry too much – the place had been for sale for ages so who knows when it would sell. We had no choice but stay and we chose not to think too much about it for the time being.

We had enough on our minds regardless – first preparation for the arrival of the twins and then their actual arrival. Life became a blur of feeding, newborn naps and cuddles, Riley’s adjustment to being a big sister. Christmas and New Year were strange that year, with our neighbourhood the only area in the whole country to be in lockdown. We ordered Christmas takeaway (Riley, the pickiest of eaters, had none of it). When James went back to work after the holidays I was all consumed with caring for the twins, a never ending, overwhelming task, as the house fell into a messier state.

And then one day our landlady showed up, as was her custom, unannounced, and told me that she sold her other place and that she’d be most obliged if we moved out by the end of March.

It was a shock. Not only because it was barely 10 months since we moved in (the agent told us we were actually safe in the house until the end of May), not just because the market suddenly went crazy and it was insanely hard to find a family house to rent. We were struggling to keep afloat with our everyday life caring for three little kids, how on earth could we possibly find a new place, pack and move? And who rents a place to people expecting twins only to yank it away with barely a thought while the babies are so young?

Despite all that, we started looking straight away – the house was poisoned to us and all the little things that we shrugged off or laughed about before turned into massive sources of irritation growing into something reminding hatred. The ancient cupboards and pantry with doors that never stayed closed. The creaky floors and lack of any sound proofing so you couldn’t clean up the kitchen after the kids were asleep as it was too noisy. The spiders everywhere you look, outside and inside. The mould in bathrooms and seemingly starting to grow everywhere. It seemed like the house was suddenly possessed by a monster who spread its mouldy tentacles around everything. The landlady kept calling me suggesting we move to an apartment with a view or a two bedroom house (she told the gardener I was too picky when we declined).

The citrus trees were still there; and so was the space. Riley still played outside in the yard sometimes. But I couldn’t wait to leave. And we were lucky enough to find a different house a few weeks later despite the crazy market. We even moved out in time to make it easy for the landlady who moved in the moment cleaners left. We now live a 5 minute walk away from the house and I walk past it with the pram daily. James told me he felt weird when he looked inside one last time: it was our place and we were booted out of it. But when I think of it I only remember the monster tentacles; the stink and the mould and the feeling of dread while the wonderful memories of the cozy fire and the tiny twins we brought there from the hospital belong to us only and are fully divorced from the place that was once our home. The new place is smaller and it doesn’t have a garden, just a small backyard but it’s full of light and it has newer bathrooms and kitchen. And while we are not enchanted with it we also expect no monsters to show up.